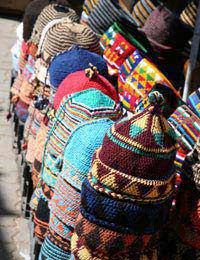 One thing you don't see too often in the UK, at least outside of London, is unlicensed street traders. Yet in most major cities throughout the world, the busiest areas of the commercial zones are often awash with street merchants looking to sell everything from fake designer handbags or painstakingly hand crafted wooden carvings to gas lighters and copied CDs. You can get a fantastic deal - much better than any you'd find in the world of legal trade - but you can also get burned if you're not careful or even slightly naive.

A fair proportion of the goods sold by street traders are things that are not legal to sell by law. The most obvious example is fake designer accessories. Other items include contraband - cheaply imported things such as cigarettes and alcohol; copyrighted material such as downloaded music; and illegal substances. Black market traders therefore, occupy gaps in the market - they provide goods for which there is a demand.

On this premise, there is usually no reason to suspect that you won't get what you're paying for. Sometimes goods may be faulty, CDs may be blank, jewellery may turn a nasty colour after a short period of time, but this is common knowledge and the risk is part and parcel of the deal.

From a legal standpoint, it's extremely unlikely that the buyer would ever get into trouble if caught in the act, even if you suspect that the goods are probably stolen. The only real exception is in the case of illegal substances, in which case a possession charge carries different weight depending on which country you're in.

Of course, not everything is illegal - artisan art and craft work, trinkets and many jewellery items are perfectly bona fide. Other street traders offer services such as portraits, face painting or even entertainment such as magic tricks. In these cases, you can plainly see what you're getting for your money. The biggest problem you have is that of negotiating a fair price.

Haggling is an art form. Some people take to it like a duck to water and manage to wrangle excellent prices from street traders every time, while others (and this is a typically British trait) find the whole process at best irksome and at worst, daunting and stressful. The psychologies behind the concept could fill the pages of countless volumes, but here's a quick guide for trying your hand with your average street trader:

Of course, many of us hate haggling and have no interest whatsoever in chancing our arm with street traders. If this is the case, to avoid being hassled it is essential not to show the slightest glimmer of interest in the goods on offer - do not even look at them!

Quickly, firmly, curtly and politely say 'no thank you' then turn away. If pestered, repeat yourself two or three times before becoming more assertive. If the seller gets even just the slightest hint that you are interested then you'll be engaged for several minutes or more.

Finally, keen observation of body language can help steer you clear of rogue traders. Street traders, who deal with the public every day and make a living from their trade will want to be overtly visible to everyone except the police and shouldn't show the slightest discomfort with their surroundings or what they're doing. Be wary of anyone who appears nervous or who tries to pull you aside or persuade you to buy something in private.