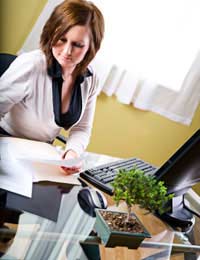 If you're planning to go abroad for some considerable amount of time, whether for work or not, you may be wondering how exactly you stand with regards to tax issues and national insurance back home in the UK. Various rules apply in various circumstances but two things remain concrete: if you are not resident in the UK, there's no need for you to pay tax in the UK; and, unless you really want to, there's little point in paying NI contributions too! However, in the words of Benjamin Franklin, "In this world nothing can be said to be certain, except death and taxes".

Whether or not you pay tax in the UK depends entirely on whether or not you're deemed to be 'ordinarily resident' here. This is judged on a number of factors - principally how much time you spend in this country. If you keep a home in this country and have family here that you visit regularly you may be classed as resident initially, but if you spend at least six months of any given year abroad you definitely have a claim for a refund of any tax you've paid on earnings here. (If you keep a home whether by rent or ownership in the UK you'll be liable for Council Tax regardless of where you spend your time).

However, claiming a refund on income tax is, perhaps unsurprisingly, a bit like getting blood out of a stone. Fill in the forms and keep copies of everything, as they tend to get lost in the system. Hound the tax office by telephone weekly, asking what stage of the procedure your application has reached and what needs to be done to effect progression onto the next stage.

The tax refund process is, naturally, structured in such a way as to discourage applicants, but if you have a large claim it may be worth your time and patience to pursue it. Remember, you are legally entitled to reclaim tax from any country in which you are not resident.

Of course, this is all presuming you work for a UK-based employer. If you work abroad for a foreign employer, you'll simply pay income tax depending on the tax system and terms of your employment wherever you are. You'll cease to exist as far as the UK Tax Office is concerned; at least until the day comes that you decide to come back, at which point you can slip back into the system quite easily.

However, if you're not employed by a UK employer and you don't claim benefits, you'll also cease to exist as far as Her Majesty's Revenue and Customs Office is concerned - in other words, you won't be making national insurance contributions.

Having obligatory contributions deducted from our earnings toward a state pension that almost certainly will not materialise goes against the grain for many of us under a certain age, but the fact is that wherever you go, you'll have to pay something. If your employer is in the European Economic Area (EEA) or in a Social Security Agreement country, you'll pay that country's equivalent of NI contributions and, theoretically, have an equally valuable state pension entitlement at the end of it all.

Bear in mind however, that your entitlement is not only at the mercy of the Inland Revenue's ineptitude but also that of the relevant authorities in your country of employment. If you thought claiming an income tax refund was like climbing through a spider's web of red tape, you're only just beginning!

If your employer is outside the EEA and is not a Social Security Agreement country, you'll be subject to the social security system wherever you are and your contributions will not count back home.

If you intend to come back to live in the UK one day, and you plan to retire comparatively soon, you can choose to make voluntary NI contributions, just so that you have an exemplary contribution record at the end of your working life and therefore, the maximum state pension entitlement.